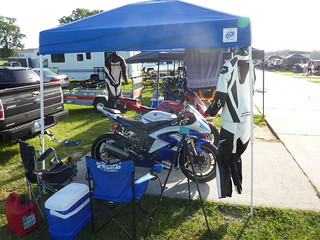 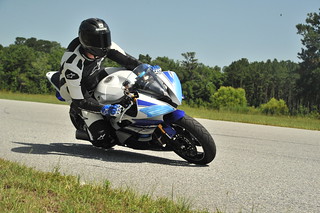 I first tried on a Shark helmet at the 2013 AIMExpo and immediately became interested.  I was in the market for a track/sport helmet that I could use day to day with good degree of comfort without sacrificing safety.  I thought I would be most interested in the Arai Corsair V but just wasn’t impressed after trying one on.  The inside felt very hard and didn’t seem like it would be comfortable over an extended period of time.

Then I tried on a Shark Race-R.  It was both light and extremely comfortable.  The XL fit my head shape perfectly, snug but comfortable.  Additionally, the padding felt plush like a pillow.  Between the weightlessness and the liner, I simply fell in love.  At $649 MSRP, it is a bit expensive but is still cheaper than the Corsair V and is a top quality helmet. Another distinguishing factor is the 2.2mm thick shield.  It is noticeably thicker than most other brands and gives confidence that it will stay intact in the event of debris hitting at high speed or on impact.  Other top brand shields start to seem a bit too thin after experiencing the Shark.  For a street/track helmet with more focus on street, the Speed-R is also a great option.

Like the Race-R, the Speed-R is a top tier helmet with a few extra street friendly considerations. Foremost is the built in sun-visor.  A slider on the top of the helmet pushes down a tinted internal visor that resides within the shell when not in use.  As someone who often rides over the transition from light to dark and has to decide which shield to attach constantly, this would be a welcome option.  There is not as much aerodynamic plastics on the Speed-R, and the helmet is a bit heavier, but still very light.  Both the Race-R and Speed-R have DOT and ECE 22.05 certifications.

And finally, the last helmet that I focused on at the Expo was the Raw.  The aesthetic is great and looks like a fighter pilot helmet.  It is the type of helmet I’d love to wear when riding my supermoto on the street, but I also feel I’d need to acquire other matching gear to really fill out the look.  Unfortunately, as fun as this helmet is, it is not as comfortable as I hoped.  The goggles and lower plastic mouth cover put pressure right around the nose and seem like they’d bite in and become more uncomfortable over time.  I just don’t think the sacrifices necessary would be worth the look, yet a part of me still wants one of these just to have on display.

Conclusion – It will be my next helmet!

If it’s not obvious, the Shark Race-R or Speed-R will likely be my next helmet purchase.  I can’t express enough how great the helmet felt to wear, and I would love to be wearing one at my next track day to boost confidence (I currently have an Icon that runs a bit loose and lifts at high speed, which is a bit unnerving).

Do you have any experience or impressions with Shark helmets?  Let us know all about it, or your personal favorite helmet, in the Comments section below.